What’s happening? Baseless claims about the integrity of the US presidential election made by Donald Trump have been among the most popular posts on Facebook as votes continue to be counted. Two posts, in which Trump questioned the legitimacy of incoming election results without any evidence, performed about nine times better than his average posts on the platform with both receiving more than 775,000 likes and reactions, although many comments on them were negative. Facebook, together with other social media platforms, has been flagging posts containing misinformation – though it has not gone as far as declaring the content inaccurate.

Why does this matter? At time of writing, Joe Biden is looking likely to win the US presidency from incumbent Donald Trump. Below is some further insight on the probable immediate impact, but we’d also like to highlight an emerging risk we see stemming from his time in office.

While he is on track to lose, some 70 million Americans voted for Trump. His approval rating remained remarkably flat during his term. He has a huge social media presence and a group of loyal supporters. Regardless of how the election – and subsequent grapple for power – ends, he is not going away.

He also seems willing to feed the public with untruths and misinformationwhile indulging in conspiracy theories. Millions of people believe him. While Trump may not be in the White House for the next four years, he could still be highly influential – potentially turning public opinion on climate change, immigration, global trade and social reforms.

There has also been talk on social media of Rupert Murdoch abandoning Trump – Fox News called Arizona early for Biden, much to Trump’s dismay, and headlines from Murdoch-owned publications have been critical of the president’s behaviour. Why? Perhaps he views Trump as a media threat in the future – “Trump TV” wouldn’t be beyond a man who loves attention perhaps more than anything. It should perhaps be mentioned, however, that Murdoch’s Fox is reportedly not planning on referring to Biden as “president elect” should enough states be called for him.

Such a media venture from Trump would no doubt have a huge impact on public perception given how many in the US are willing to throw their support behind him and how many seem to hang on every word he says.

Further thought from Curation – Engaging the voting population with a media franchise is one thing, but engaging eligible voters with the political franchise or suffrage is clearly another. The US Elections Project, administered by Dr Michael McDonald, Associate Professor of Political Science at the University of Florida has estimated a record turnout of 66.9% of eligible voters this year, the highest since 1908.

However, that means that almost one-third of eligible voters felt disenfranchised enough not to vote. One solution may be compulsory voting. This will still result in enforcement issues, however, either through cost or complexity on a global level, and such action may still only increase turnout by single digit percentages. Australia, that has had compulsory voting since 1920 and the highest turnout globally, had just over 92% eligible voter turnout in its most recent election.

Perhaps, therefore, it is time for a rethink on the voting process itself. A first-past-the-post system – such as those in the US and UK – tends to favour a two-party system (Duverger’s law) and can result in a feeling among the electorate that individual votes don’t matter, particularly in a skewed area.

Should ranked voting systems such as Single Transferrable Voting be considered? Education will clearly need to play an important part in enabling any voting system to work effectively. And that could ultimately bring us back to the nature of the media we consume. 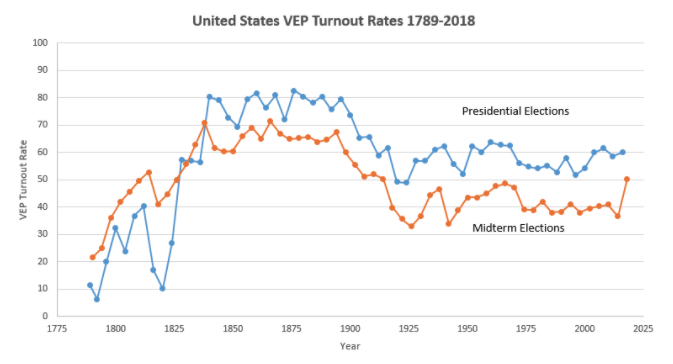 Further information on the US presidential election’s impact:

Thoughts on impacts on stimulus and other measures from Charles Myers, Founder of Signum Global Advisors